My talent is football. I love playing and watching sports, but football attracts me the most. During my childhood, I used to play table tennis a lot and cricket as well, but as I grew up, I lost interest in these sports, and gained interest in football. All of my cousins used to play football, and because of that, I started playing it myself, I found my hidden talent, I got really good at it, and I used to be the first pick in any of the teams.

At school level as well, I played a lot, we used to play football, in the breaks and in our games periods as well. I was always the captain of my team. And as I got into my o levels, I was considered for the school team. And at that age, getting in the school football team was a big thing. I played in the school team for the next four years, and was named the captain in my last year. But when I changed schools, I lost interest in playing football, studies took a toll on me, and there was no time to play football, and also, during a match I got badly injured, and wasn’t able to play football for 6 months. But I kept on watching football, I follow Portugal and Manchester United. My favorite player is Cristiano Ronaldo. I try not to miss a United match. One of the things in my bucket list is, visiting Old Trafford, and watching Ronaldo play live.

I prefer playing as a holding midfielder, because sprint isn’t my forte. I play for the phantoms in the LSE football league.

Football is a dream I never want to wake up from

When I broke my ankle while playing football for the first time when i was 8 years old, I made a confession to myself that whatever happens, I will never play this game ever again in my life. 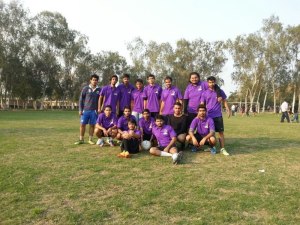 I used to go and watch other kids play football during my time of recovery. I followed my favorite team Arsenal and never missed watching a game from them. During that, I realized my love for football. I knew I had it in myself but the fear of getting injured again took me a while to kick the glorious football again. It took me almost two years to overcome my fear. It was the time when there were football trials for a team of junior section in my school. I had to get in the team, I kept telling myself with a sense of motivation that I was better and more knowledgeable about the game than all my other fellows preparing for the trials. I practiced hard enough to make myself sure that the injured ankle was alright. I used to kick the ball 24/7 in the backyard of my house and in my room as well. There I discovered this talent in me. With ball I was very quick and kicking on the walls of my house improved my touches. During trials, i was nervous. I knew I would get selected but still, there was fear of rejection. The fear of being let down. Within 10 minutes, the football coach of our junior campus Sir Arif called my name and told me, you’re selected. There I wrote my name on that teams list and at that moment all I could do was to run back on the field and finish the game.

Time past, I used to play football regularly for my team in school and my neighborhood. I never got substituted during my time of playing. In the eleventh grade, I got my first own football jersey with the number 14 on it. It was something I always wanted. I earned it. It was for the Punjab Olympics in which our team got 4th position and we only lost two matches in the tournament. My position was to cover the defense line and I believe I was very successful in doing that as we lost both the matches on penalty shootout and we didn’t concede a single goal during the 90 minutes of play in 8 matches.

My O level grades disappointed me and changed my priorities. During A-1, all I wanted to do was to study and get good grades. So for one full year, I didn’t touch the ball. I missed the trials intentionally and left my team in neighborhood as well. My team in neighborhood had a name Illusions FC. It is still considered in top 10 teams of Lahore. I won many prizes and tournaments while playing in the team. I had left it all back and thought studying was something more important. In AS level, I got 2 A’s. I was quite happy with the result and then, i decided to continue with my extra activities. In A2, inter-class tournament, I decided to play again. I was the top scorer with 7 goals in 3 games which included one hat-trick. I was selected automatically without any trials for my school team. My sports teacher, Sir Iqbal, named me the captain of the football team for the Punjab Olympics. Although we were eliminated in our very first match, I am still proud of captaining the team of my school.

The journey of football with me still continues in LSE. I have my own team although I am not as good as i used to be since I have gained weight, I still have a team of my own named Phantoms. We reached semi finals in the last league we played and I know, i have this feeling that before graduating in almost 2 and a half years time from here, my team will win the football league once.

Football is my talent and my love for football will never die.